The domain has been an object of envy for many Malaysian domainers for many years and when financially-troubled Live Current (formerly Communicate.com), the most recent owner of malaysia.com announced back in October 2008 that it was getting rid of six of its premium domains including its own former company name, Communicate.com - the rest being Brazil.com, Vietnam.com, Indonesia.com, and GreatBritain.com in order to raise at least US$6-million, many were speculating on the potential buyers, prices and order of the sale.

We finally have a winner - MALAYSIA.com as the first to go for a hefty $400,000 to a private company with a fellow Vancouver-based Jack Ong (Malaysian?) reported as its technical contact, speculated as early as in January 2009, and confirmed just early this month -- not the most expensive country name bearing .com names traded so far though as Korea.com was reportedly sold $5-million (pending verification) and NewZealand.com for about half-a-million US dollar (NZD1-million - purchased by the New Zealand government, purportedly inclusive of a premium/penalty for its prior attempt to hijack the domain) in 2003 and America.com wasn't even sold last year despite having received bids up to $1.71-million (the seller/appraiser was expecting between $3.5-7M).

If you're wondering why the Government of Malaysia which has been marketing the Malaysia brand (at the cost of many of its previously well established geographical brands like Kuala Lumpur, Penang etc.) didn't try to claim rightful ownership of the domain, it's because the government of South Africa had tried it on the respective southafrica.com domain in 2000-2001, but failed.

Although Tourism Malaysia (which briefly used malaysia.travel domain in 2007), the government arm for promoting Malaysia as a travel destination was reported to have some cash in reserve towards the end of 2008, it's safe to assume that the heavily criticized government after a poor election performance less than a year ago, might want to avoid further controversies on its mega spending habit - after all, many now would question real values of domain names in light to web 2.0 and google trends in recent years - the difference for malaysia.com however is that it is not just a domain name, it's the ultimate brand for Malaysia!

But Malaysian government and many of its politicians, including Prime Minister Dato' Seri Abdullah & PM-in-waiting Dato' Seri Najib are well known to perform poorly on brand mastery, especially, an online one. After all, why would the these head of state personalities rely on the confusing WarkahUntukPM.com.my and 1malaysia.com.my domains as their respective ways to reach the people? And one would wonder too, why malaysia.com.my and malaysia.my, as registered by government-owned Langkawi Development Authority (per whois report) remain unused all these years, but instead are being parked, pointing to their registry-appointed reseller's website?

Think you can find another million-RM domain soon? Well, like many domainers, I've been more than happy with RM1,000 domain names considering that the investment to own one starts at just RM50 or less, a year - less than what most people pay for phone and SMS a month these days.

The rush continues -- adding to the well over 100-million active domain names today is at least two new domains being registered every passing second!

Say, anyone want to guess how much Indonesia.com or Vietnam.com will pull? Both are fast-growing southeast Asian countries in terms of Internet use adoption so, the potentials are endless...

I'm thinking that many millions of Indonesians and Vietnamese will finally get online just by being told of how much these domain names for their respective nations sell for, perhaps flocking to learn how to blog their way to wealth... Consider that these nations rank high on Google Search for the "blog" keyword: 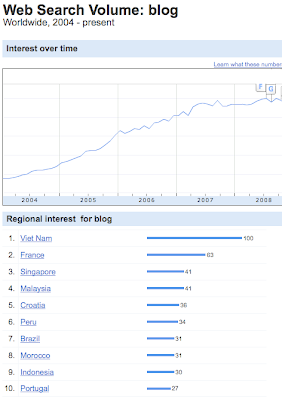